In the poster of Pati Patni Aur Woh, we can see Kartik Aaryan in a happy mood winking his eye thus hinting us to take us on a laughter riot. He is seen in formal attire with a check shirt and trouser and riding a bullet. 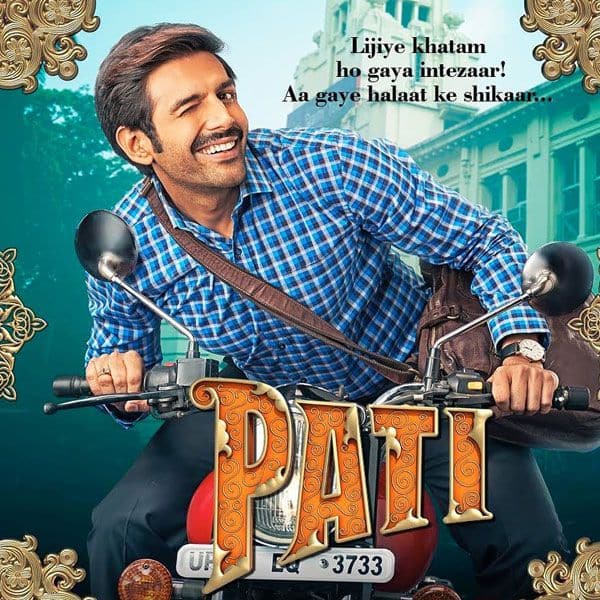 Kartik Aaryan, Ananya Panday and Bhumi Pednekar starrer Pati Patni Aur Woh has been in the news since its inception and now the makers have dropped the first poster of Kartik Aaryan aka Pati of the film. In the poster, we can see the 28-year-old star in a happy mood winking his eye thus hinting us to take us on a laughter riot. He is seen in formal attire with a check shirt and trouser and riding a bullet. He shared the image on his social media account and wrote, हाये…क्या स्माइल है ? Miliye #ChintuTyagi se Kanpur ke sabse आदर्शवादी Pati??#PatiPatniAurWoh ???.” By looking at the poster, we must say that convincingly looks like a middle-aged guy working a corporate setup.

Speaking about Kartik’s new look producer Bhushan Kumar of T-Series earlier said, “To essay his character in Pati Patni Aur Woh, Kartik has donned a new look which is bound to surprise everyone. All of us on the set were taken aback to see this transformation of Kartik from a boy-next-door to a mature individual. He looks visibly different from the characters he has played in the past. I am sure this decision on his part to experiment with his look will be liked by his fans.”

Adding further Producer Juno Chopra, B R Studios said, “Kartik’s new look is sure to surprise everyone. Especially because no one has ever seen him in this look before. He is playing a newly married man in the film and his look needed to be changed. Kartik was sporting enough to go to any length for his character and we are excited to begin shoot for the film”.

Pati Patni Aur Woh is directed by Mudassar Aziz, who previously helmed Happy Bhag Jaayegi franchise. The film is set to hit the screens on December 6 and will clash with Panipat at the box office Anyway, have you liked Kartik’s look from the film? Tell us in the comment section.

Ranveer Singh’s co-star Shalini Pandey: I was pleasantly surprised that people in Gujarat recognised me as ‘Arjun Reddy’ heroine