Amrita Singh putting kala teeka on Sara and Ibrahim during their shoot is every Indian mom ever.

Sara Ali Khan and brother Ibrahim Ali Khan recently shot for a magazine. And while Sara really brought her A-game, Ibrahim was a surprise of them eugenics that we have heard so much about. Honestly, we were thinking- kisiki nazar na lagey! But as they say, moms know the best which is exactly why Amrita Singh did what she did! 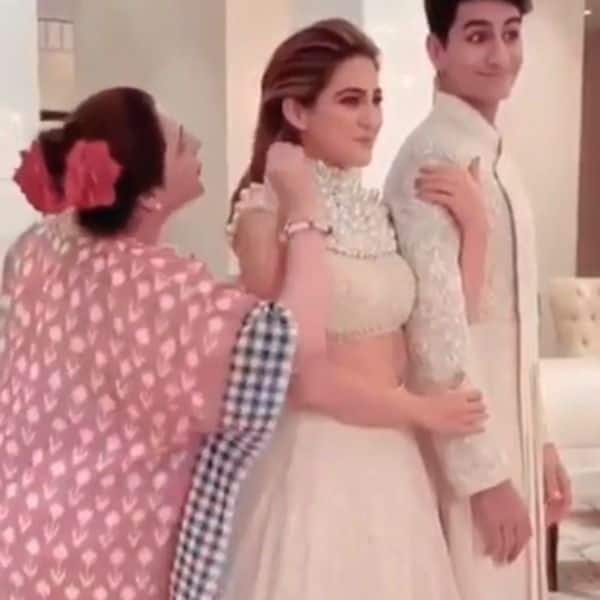 Don’t think you’d missed it really but, Sara Ali Khan and brother Ibrahim Ali Khan were all kinds of #SiblingGoals on their photoshoot together for Hello magazine. It was Ibrahim’s debut before the camera, not that it came across but, the brother-sister did duo cast a spell in their spellbinding Abu Jani Sandeep Khosla outfits and it was hard to focus. While Sara really brought her A-game, Ibrahim was a surprise of them eugenics that we have heard so much about. Not just us, even Priyanka Chopra couldn’t help but praise their genes and we can totally see why.

Honestly, we were thinking- kisiki nazar na lagey! But as they say, moms know the best which is exactly why Amrita Singh who was present during their shoot did something adorable and hilarious at the same time. She put a kala teeka on her children and it is aww-worthy. Not to mention, Sara Ali Khan and Ibrahim Ali Khan‘s expressions say it all!

The former actress had also opened up about them both and had said, “Sara is a very God-loving child and has immense respect for every belief. She is also an extremely disciplined girl, be it her work or her mind and body, I see the effort she puts in every day to keep the balance and that’s really commendable. Ibrahim is the old soul in our home. He’s kind and gentle and has the most sorted mind. He’s gifted with the ability to face the harshest truth with a brave smile and a strong will to overcome any shortcomings. But, the one problem I have with them is that they are both extremely messy and untidy!”

On the work front, she will next be seen in Imtiaz Ali’s Aaj Kal alongside with Kartik Aaryan. It is produced under the banner of Window Seat Films and is scheduled to hit the screens on February 14, 2020, during Valentine’s Day weekend. The movie is a sequel to director’s hit film, Love Aaj Kal. It has been shot in Delhi, Rajasthan and in Mumbai. The film will clash with Ayushmann Khurrana’s Shubh Mangal Zyada Savdhaan and Aditya Roy Kapur and Disha Patani starrer Malang at the box office. Meanwhile, the remake of Coolie No 1 will release on May 1st next year.

HAPPY BIRTHDAY BIG B! Amitabh Bachchan expresses gratitude to fans for their birthday wishes, With a heartfelt note .

Ayushmann Khurrana Increased his Charges by 500%

Robert Downey Jr offers Marvel memorabilia to those who volunteer at Covid-19...

Shilpa Shetty makes the most of self-quarantining, makes...